New Release: Behind the Magic Curtain by Birmingham’s T.K. Thorne

“It is my hope that this book will contribute to our understanding of ourselves and our world and illuminate the fact that all of us, no matter our background or positions, can make a difference.”

Synopsis: Birmingham, Alabama gave birth to momentous events that spawned the Civil Rights Act of 1964 and affected world history. But that is not why it is known as The Magic City. It earned that nickname with its meteoric rise from a cornfield valley to an industrial boomtown in the late 1800s. Images of snarling dogs and fire hoses of the 1960s define popular perception of the city, obscuring the complexity of race relations in a tumultuous time and the contributions of white citizens who quietly or boldly influenced social change. Behind the Magic Curtain peels back history’s veil to reveal little-known or never-told stories of an intriguing cast of characters that include not only progressive members of the Jewish, Christian, and educational communities, but also a racist businessman and a Ku Klux Klan member, who, in an ironic twist, helped bring about justice and forward racial equality and civil rights. Woven throughout the book are the firsthand recollections of a reporter with the state’s major newspaper of the time. Embedded with law enforcement, he reveals the fascinating details of their secret wiretapping and intelligence operations. With a deft hand, Thorne offers the insight that can be gained from understanding little-known but important perspectives, painting a multihued portrait of a city that has figured so prominently in history, but which so few really know. 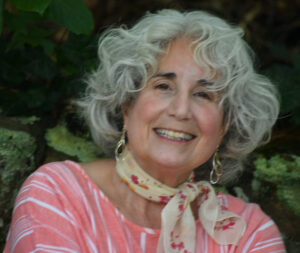 T. K. Thorne has been passionate about storytelling and writing since she was a young girl, and that passion only deepened when she became a police officer. She served for more than two decades in the Birmingham police force, retiring as a precinct captain and then as the executive director of a downtown business improvement district focused on safety, retiring to write full time.

Her books and essays include two award-winning historical novels (Noah’s Wife and Angels at the Gate); two nonfiction civil rights eraworks (Last Chance for Justice and Behind the Magic Curtain: Secrets, Spies, and Unsung White Allies of Birmingham’s Civil Rights Days); and a dally with murder, mystery, and magic in House of Rose and House of Stone, the first two novels in the Magic City Stories trilogy. She writes from her mountaintop home northeast of Birmingham, often with a dog and cat vying for her lap and horses hanging out in the yard.

Thorne’s writing process for Behind the Magic Curtain: Secrets, Spies, and Unsung White Allies of Birmingham’s Civil Rights Days is closely entwined with how the project to write it came about. In the fall of 2013, Thorne received an email requesting a meeting with four Birmingham men she didn’t know at the well-known law office, Sirote & Permutt. Out of curiosity, she agreed.

There, she met two Jewish attorneys (Karl Friedman and Bill Thomason), an Episcopal minister (Doug Carpenter), and a former newspaper reporter (Tom Lankford). She recalls sitting at the polished hardwood table in Friedman’s office, trying to distill from their conversation why she had been asked there. Eventually, she concluded that the four of them had experienced the turbulence of the 1960s and shared the belief that an important part of Birmingham’s past had been overlooked and needed to be told. They also seemed to share another belief: Thorne was to be the one to tell it. 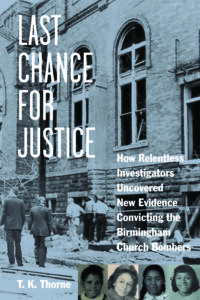 Thorne’s first nonfiction book had recently been released—Last Chance for Justice, relating the behind-the-scenes investigations of the 1963 Birmingham Sixteenth Street Church bombing case—and she assumed they mistakenly thought her to be a civil rights expert. She tried to explain, but to her surprise, it was not that book that had played a part in her being chosen for the project. Bill Thomason had recently read one of her historical novels, Noah’s Wife, and said that if she could write so convincingly about a woman who lived thousands of years ago, Thorne was the right person to pen such a book.

Tom Lankford was a police beat reporter and photographer for the Birmingham News, present at all the major civil rights events across Alabama and Mississippi and involved in edgy wire-tapping escapades with law enforcement (including City Hall, the Ku Klux Klan, a neo-Nazis organization, and Black movement leaders), so he was uniquely positioned to recount this overlooked period in Birmingham’s past. Even so, Thorne was not sure that she would be the one to share it. To say she was not sold on the idea, she reflects, was an understatement, having (rightly) estimated significant research and several years would be required for the project.

Lankford changed her mind with a story-sketch he imagined might become the first chapter, detailing the day he shared breakfast with the powerful and charismatic Vincent Townsend, Vice President of the Birmingham News. Thorne beautifully illustrates, “As Townsend peppered his eggs, he likewise peppered Lankford with his ideas and vision for the city and gave him a secret mission that would forever alter the young reporter’s life and influence the path of Birmingham, a city that would be a catalyst for change in both the nation and the world.”

Lankford and Friedman, a prominent attorney and leader in the Jewish community, would be the major contributors to the book. Thorne initially organized their extensive notes and interview materials into a coherent timeline that mirrored documented events in Birmingham’s civil rights history. Her career in the Birmingham Police department provided a helpful perspective in understanding the world of law enforcement which Lankford became enmeshed in.

She also followed leads to amass the stories of many more White men and women of varied ages who had contributed in some way to the fight against Jim Crow and segregation and to weave them into the timeline as well. The scope of the story grew enormous, as she recalls personally interviewing over fifty people, reading numerous books, and accessing archived material from the library, newspapers, and the Birmingham Civil Rights Institute. For Thorne, finding these all-important but nearly lost stories became an obsession.

When asked about her intentions for Behind the Magic Curtain, Thorne reveals a somewhat blurred idea at the start of the project before it bloomed into an inspiring recollection of civil rights events:

“When I began, I had no idea that the topic would even be timely. I didn’t have an agenda. At first, I just was sucked in by the fact that Lankford had such an inside seat. Actually, “seat” is the wrong word. He was a player. He recorded history, but he also had an influence on it. Then I became intrigued about other stories that have remained behind the curtain. Many of them had either not been told or been lost in the dust of the street demonstrations. This is not to say the demonstrations weren’t important; they were critical to national changes, yet many ironies I had never been aware of determined their influence and many people prepared the way for changes in the Magic City.

The story of the civil rights movement is worth retelling, reexamining, and honoring, however, it wasn’t until I began writing this book that I realized who the White supporters of desegregation in Birmingham were and what they had faced. Like the Black community, they were targets of personal threats and harassment from extremists, but they did not have the comfort and support of their own community; they met scorn and rejection from their neighbors and constant threats of violence in order to stand up for the rights of Blacks to vote and to receive a quality education. As civil rights leader Amelia Boyton said, they were not fighting for themselves but for others, and they had everything to lose.

That was the reality in the 1960s in this city for Blacks and Whites who spoke up. Speaking up and standing up is hard. We are social creatures. It’s part of our wiring and a reason we survived as a species. Courage can have a personal cost. But not standing up has a bigger one for our world. It is my hope that this book will contribute to our understanding of ourselves and our world and illuminate the fact that all of us, no matter our background or positions, can make a difference.”

Links to purchase Behind the Magic Curtain

Other books by T.K. Thorne 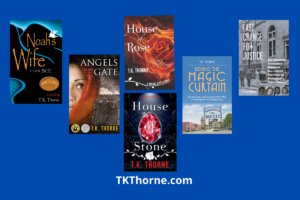