Derriann Pharr is a multimedia artist based out of North 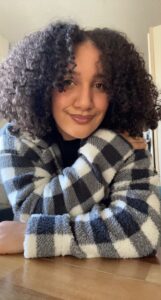 Alabama. Her fixation on color began in a church, where she sat in awe of the way light manipulated the colors of the stained-glass windows. Since then, the purpose of Derriann’s work has been to explore the way those colors compliment skin, style, mood, and other intricate details of our lives.

A: Can you tell me a little bit about yourself and about your background as an artist?

D: I’m Derriann, a senior at UAB. I transferred from Itawamba Community College in Mississippi in 2020, just before the pandemic. I wasn’t initially an art major, though I was working in art outside of school, and I was selling and trying my best to be an artist in the real world. I wasn’t actually studying it, though, so I came in thinking that I would be in the business school and that this would coincide with working as an artist. It didn’t work out there, so then I switched to majoring in communication with a minor in art studio. This semester, I flipped those to major in art studio and minor in communication. So I’m here now, actually studying everything; I feel like I’ve sort of done everything backwards, but it’s working out and I’m much happier than I’ve been before.

Outside of schoolwork, I’ve always done art. I’ve always been affiliated with it, and it’s been a major part of my life. But I think it was about 2017 when I actually started thinking I should take it seriously. From then on it sort of just happened naturally with one thing after the next.

A: What motivates you to create your art?

D: Just thinking back to 2017—that’s what? That’s 5 years ago. It’s insane to think that I’m still doing this like I am now. What motivated me to start was an initial itch like I had something I’m supposed to be doing. I don’t want to be cheesy and say it was almost spiritual, but it was just a really big, weird urge, and it seems like everything has fallen into place since then. I think what inspired me to really start would have been navigating what was going on at the time. I think it was just to have an outlet, which is why most people start, I think. But as I realized that this should be my career, and this is what I actually want to do, I started diving into themes and specifically exploring the transformation into womanhood.

As of now, my work specifically relates to self-identity, in exploring the goods and bads of myself through my work. I like to tell people that the characters and things that are in a lot of my recent work are almost like idols or role models because they exemplify this confidence and sensuality—even arrogance—that I don’t feel like I have in real life. They’re what I would aspire to, if that makes sense. They’re my way of getting to explore being confident and free and comfortable in my skin.

A: Regarding your work in Aura’s newest issue, do you want people 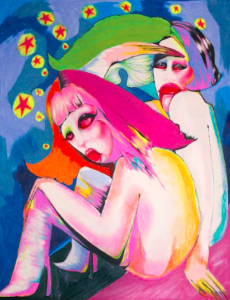 to be informed by it in that same way?

D: I think so. I would hope that people see that in my work. I would hope that when people view it, it inspires them to feel empowered more than anything. I feel that it’s a little bit of a taste of something that I struggle with as someone trying to maneuver through moving from girl to woman. There’s a lot of things that many of us struggle with, like jealousy when you compare yourself to other women, or just feeling inferior, or feeling like you’re not confident enough to be who you are. I would hope that people see my work and they feel how I feel about it. I’ve had a lot of really wild responses to my work, though.

D: I think my favorite interpretation of my art—and it was really a nice way for this person to explain my work because it felt in a way like how I feel about it—was it being compared to birds. They compared it to a bird’s mechanism where they flash their feathers at people. This can be in defense to repel things for their safety or to attract others. The characters almost gross you out, and you kind of want to judge them. but at the same time, you can’t not look at them just being who they are. So I love that analogy, and that was probably the most important one, to me.

A: Shifting to your process and technique, what materials did you use for your work in Aura?

D: I used the primary materials that I like across the board for my pieces. It’s usually the Prismacolor colored pencils, but in mixed media, sometimes I’ll use wash paints or acrylics; I pretty much just dabble in that realm of materials. Because I like to draw, colored pencil is my preferred way to make art, so I tend to stay away from paintbrushes or painting. I like the sensation of drawing, and just how it feels to have that much control over a piece. I still experiment a lot. I’ve figured out ways to break down pencil and mark-making with wax pencils and stuff like that using different types of rules, so it almost feels like painting sometimes.

A: Can you share a bit about your creative process?

D: My recent work is definitely more intuitive than before. I don’t necessarily sit down and decide that there’s like a thesis or story for each piece, but I will say that I usually title a piece before I ever start drawing. There might be a slight theme in mind, but I won’t say it’s totally planned. In “Bruce Beach,” for example, I was thinking along the lines of a safe space. So that would have been the theme, and “Bruce Beach” was the first name that popped in my head, and it kind of went from there.

A: One of my favorite things about your art is your use of vibrant colors. Even in your older work, you use color in a unique, eye-catching way. Would you be able to speak to how and why you use color so prominently in your work?

D: I think I’m really drawn to how colors interact with each other. If I was looking at artwork, that would be the first thing that I would notice about it. How are two colors interacting? Are colors mixed together, or their textures overlaid? There are different ways that they can interact, so that’s an interest of mine, which is why I introduce so many different mediums to my work. It really excites me to see how two colors might come together.

For that reason, I’m naturally going to be someone that uses a lot of color. I’ve tried really hard as an artist to explore and refine that to make sure that it’s not a gimmick. I’ve tried to be more intentional with how I use color, and a lot of times color is the first thing that people will compliment, but it’s something that I’ve actually tried to draw back on. The bird analogy kind of speaks to that attraction. They have no choice but to acknowledge it at least for a second.

A: What is one thing you would say to the readers looking at your work in the magazine?

D: I would hope that you could see yourself in the work. In that way, I just want you to find your confidence, find yourself. I hope that you do, but interpret it how you want. I love to hear other people perceive it, too. 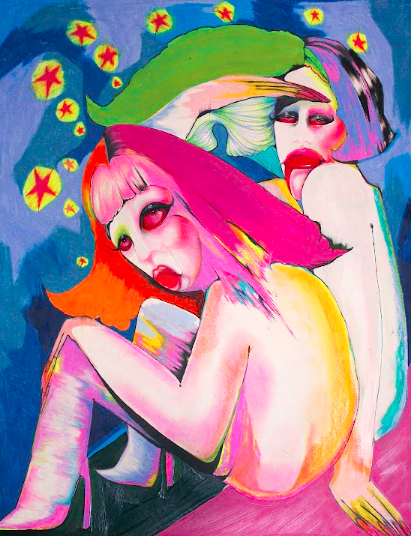